Brought to you by WBR Insights

It's been a good year for Delta. While many other airlines in the US - and indeed around the globe - have struggled with scheduling difficulties (thanks to the grounding of the Boeing 737 Max), maintenance problems, and labor-relations disasters, Delta has managed to soar ahead, posting a record $1.5 billion in profit. Not only did the airline beat Wall Street expectations, but they also saw their customer loyalty go from strength to strength.

Over the past year, the company has found that more travelers are willing to pay extra for more expensive seats - 65-70% of premium cabin seats were sold in 2018, compared to just 13% in 2011. More customers are booking with the airline directly, and its frequent-flyer loyalty program is flying.

Now, the airline looks set to beat the competition once more with the launch of new, premium features in the main cabin which will provide "wow" experiences for economy fliers.

Passengers in the economy cabin can now look forward to a complimentary "welcome" cocktail immediately after take-off - before the first full drink service - and a hot towel service shortly after that. A second hot towel service is then offered shortly before arrival so passengers can freshen up before they depart the plane. The airline is also offering enhancements to the main meal service, including the option to mix-and-match appetizers and larger entrees. This differs from the pre-plated meals that Delta previously offered, with a set appetizer and dessert paired to each entree (so, if you wanted an appetizer from one meal option, but the entree from another, you couldn't make that choice). Additionally, economy passengers now receive chocolate right before landing as a little treat and token of gratitude for flying with Delta.

"This is about investing in every single customer who chooses Delta, no matter where they sit on the plane," said Delta's Senior Vice President of In-Flight Service, Allison Ausband. "The thoughtful touches we're investing in throughout the new Main Cabin experience were designed by flight attendants with one goal in mind - delivering an exceptional experience that our customers will rave about and one that our team, the best in the business, is proud to deliver." 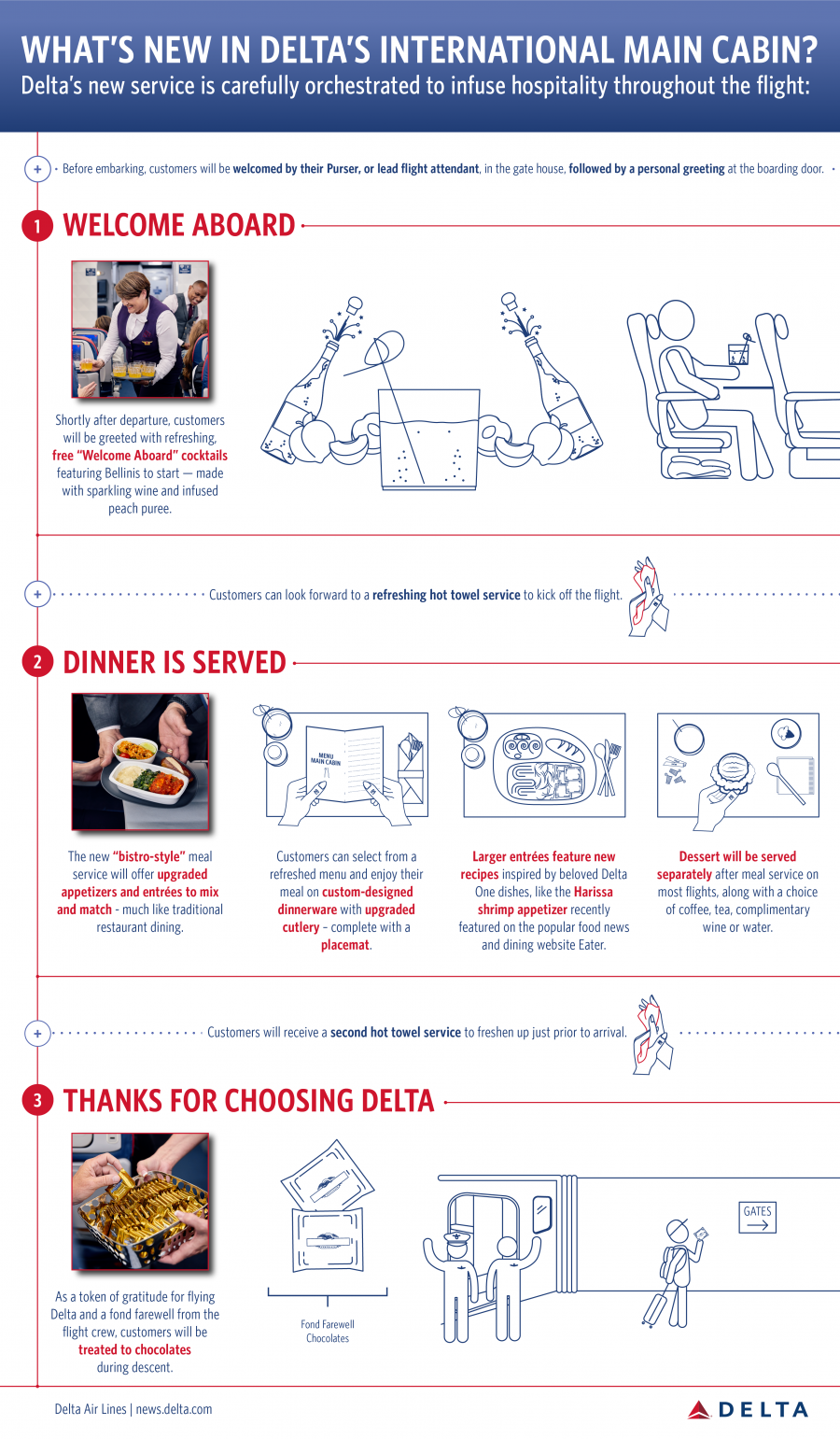 Delta has been testing its new main cabin service for more than a year on the Portland to Tokyo route. The airline says that it has been the most rigorous in-flight test in Delta's history, gathering feedback from thousands of customers through nearly 14,000 hours of flight time. Feedback from crew members has also been critical in the new service's development, which has been put together by a design team made up of 24 flight attendants.

"With this service, at the end of the flight I know I've made a difference in the customer's journey," said Michael Miller, a New York-based Flight Attendant and member of the design team behind the new experience. "I know I've had the opportunity to not only offer an exceptional onboard experience, but also to engage with customers and create special moments for them."

Delta has also provided specialized training to its team of more than 3,000 Pursers - i.e. Delta's lead flight attendants on international flights. Pursers are responsible for the "nose-to-tail" customer experience during flights. Delta has now elevated the Purser role to include pre-flight introductions in the gatehouse and personal greetings at the boarding door - "Just a few examples of the important connections between crew and customers that lead to memorable moments and a delightful experience all around," Delta says.

The new experience was met with high marks during testing, with increased customer satisfaction scores recorded on more than 700 flights over the Portland to Tokyo trials. It's all part of the company's multi-billion investment in the overall customer experience - much of which has already been introduced to the main cabin, including free meals on select domestic coast-to-coast routes, free mobile messaging, free in-flight entertainment, upgraded snacks, the addition of sparkling wine, access to Wi-Fi on nearly all flights, and refreshed food-for-purchase options. Delta says that more international onboard enhancements are coming to the main cabin soon, such as refreshed earbuds and headsets, to further demonstrate the airline's commitment to creating a best-in-class experience all customers can look forward to.

Delta's CEO Ed Bastian also stresses, however, that while such investments in service are important, it's Delta's culture and people that remain key to success, as it is they who are ultimately responsible for ensuring customer experience expectations are met for every single passenger during every single flight. "The Delta people truly are the only thing that separates one airline from the other," he says. "And that's because we believe we have a higher calling, to bring the world together and make those connections. That's why Delta people are the best in the world."